By Pedro Pizano and Albi Cela WASHINGTON D.C. - The National Theater of Albania came crashing down on May 17, 2020 at 04:30 a.m., with people still inside, in an illegal demolition to benefit the cronies close to Prime Minter Edi Rama. The European Parliament condemned it last Thursday implying that it would impact Albania’s ever present desire to join the European Union.
Three years ago, Prime Minister Edi Rama’s socialist government came up with the idea of destroying the National Theatre in order to build a new one. The project was unscrupulously awarded to a construction company with close ties to Prime Minister Edi Rama and the government. Other major projects had been awarded to this comapny including the reconstruction of Tirana’s central square and the Lake’s Amphitheatre. The current project included several high rises right next to the theatre.
However, the project was delayed due to civil unrest and international pressure from the European Union and Europa Nostra, a pan-European federation for the protection of cultural heritage, that listed the Theatre as an “endangered cultural monument.” For the next three years, a group of artists and activists, known as the Alliance for the Protection of the National Theatre, turned the theatre into their second home. For 27 months, they protested non-stop, describing it as one of the longest protests in the region.
On May 8, 2020, the government transferred the National Theatre land ownership to the Tirana Municipality. On May 14, 2020, the Tirana City Council ratified the decision to demolish the theatre. The decision was illegal because it violated several provisions of the Local Governance Law. The members of the Council should have been given five days to discuss and debate the decision. They were only given one day. There is also a requirement in the Local Governance Law, by which the City Council has to wait at least ten days before a decision is executed. The theatre was demolished on May 17, 2020, barely three days after the decision. On May 14, 2020, President Ilir Meta had filed a complaint with the Constitutional Court against the land ownership transfer to no avail.
Secondly, the City Council did not have the right to order the demolition. When it comes to cultural monuments, the National Territorial Council is presumably the organ that can decide whether a monument can be demolished or not, although they argue it has been “under evaluation” since 2016.
Lastly, this was also a constitutional matter because it arguably involves at least seven basic rights protected under the Constitution of the Republic of Albania, including Article 11 (protection of public and private property), Article 59/1/g (Protection of Cultural Heritage), and Article 124 (Competences of the Constitutional Court).
In July 2019, President Ilir Meta had submitted a request to the Constitutional Court to declare the law on the demolition of the National Theatre unconstitutional. As a result of the Judiciary Reform, which vetted out the majority of the judges, the Court is currently unable to take any decision. However, the Court, which at the time had four members, accepted the application. Admissibility requires only a three-member panel. However, to decide a case the Court needs at least six members.
The demolition of the theatre doesn’t only amount to a violation of administrative procedures, but also human rights, especially that of the right to enjoy cultural life. While the judiciary in Albania is not functional due to the lack of judges in the High and Constitutional Courts, the Alliance for the National Theatre should consider addressing the issue on the international level. The European Court of Human Rights under the European Convention on Human Rights (ECHR), the Human Rights Committee under the International Covenant on Civil and Political Rights (ICCPR), and the Committee on Economic, Cultural and Social Rights under the International Covenant on Economic, Cultural and Social Rights (ICESCR), are the most viable options. As a state party to these instruments, Albania has a positive obligation to protect and advance the rights enshrined therein, namely the right to cultural life protected under Article 15 of the ICESCR, and the right to participate in public affairs under article 14 of the ICCPR.  The mechanisms to address this issue are there, waiting to be put in motion, and we stand ready to help.
Besides the demolition of the theatre, a concerning element was the police brutality during the protest. The police entered the theatre at 4:30 am, forcefully removing the actors and activists that were inside. The demolition started while people were still inside the building. The following hours of the protest were brutal. Actors, activists, and journalists were dragged, beaten, and illegally detained as you can see in this three-minute video (which hasn’t been published in full before in U.S. media). 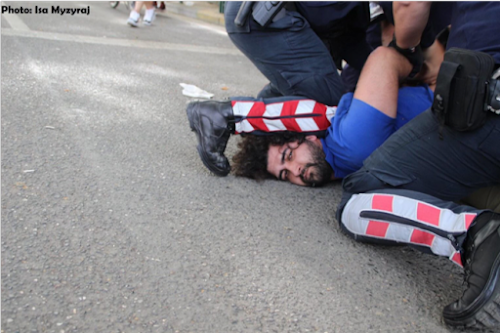 Albania has made great strides in the rule of law since the days of its communist dictator Hoxha. Press freedom has improved, though it has recently stalled. Economic freedom has improved, and the human development indicators have steadily risen.
“The time is ripe for Albania to keep advancing towards an ever more democratic, prosperous, and secure nation,” said Ambassador Mark Green, the Executive Director of the McCain Institute for International Leadership and former USAID administrator. “It no longer needs old-style foreign assistance but rather the empowerment of Albanians to decide how and for whom the country should develop—not only the cronies,” Ambassador Green continued. “The 27-month-long protest at the Theatre speaks to the opening of the democratic space and it should be maintained.”
The hybrid semi-authoritarian regime of Albania has now gone after the Arts by illegally demolishing the National Theatre. If not for the Arts, at least let us stand up for the people and the rule of law.
Albi Cela is the International Rule of Law and Security Program Fellow at the Sandra Day O’Connor College of Law of Arizona State University in Washington D.C. Albi is the founder of Rule of Law Albania, a platform which promotes rule of law, good governance, and democracy in Albania and beyond. The platform features a podcast, and a blog. He recently co-authored an op-ed on press freedom in Albania for the McCain Institute blog with Pedro Pizano and interviewed him on press freedom in Albania and beyond. Pedro is the Northwestern-McCain Public Interest International Legal Award Fellow at the McCain Institute for International Leadership.
This story was originally published at Exit.al in English & Albanian.